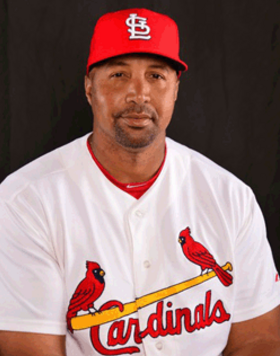 Derrick has been in professional baseball for 31 years as both a player and coach. Derrick spent parts of 10 seasons in the Major Leagues compiling a .271 lifetime MLB average with the Cubs, Brewers, Astros, Phillies, Expos and Orioles. After his MLB career he played three seasons in Japan for the Chiba Lotte Marines.
Derrick was born in Rochester, NY, but grew up in Delaware. He was a three-sport athlete at Newark High School. While in high school he was a part of three State Championships (1) Baseball ’84 and (2) Football ’84 and ’85. He was a three-time All-State selection in baseball and one-time All-State selection in football. After high school Derrick accepted a scholarship to play football and baseball at Virginia Tech. Derrick was a first-round pick (9th overall) by the Chicago Cubs in 1986.
Derrick has three sons (Derrick Jr, Donovan and Devon), two of which, Derrick Jr. and Donovan, play baseball at Villanova University. His father Dave played Major League Baseball for 12 seasons for the Orioles, Brewers, Braves, Rangers and Pirates. Derricks brother, Dave Jr., is a Major League Scout for the Toronto Blue Jays.
Derrick is currently the manager of the Frederick Keys in the MLB Draft League.
Coaching/Managing Experience:
Other Honors:
View on Mobile