Mike Bordick was born in Michigan and spent parts of his early childhood in Maine and in upstate New York before the family settled in Winterport, Maine, while he was in high school. He attended high school at Hampden Academy in Hampden, Maine. Bordick starred for the Hampden Academy Broncos. The High School field is named in his honor.

Mike  attended the University of Maine, where he played college baseball for the Black Bears. In 1986, he played collegiate summer baseball in the Cape Cod Baseball League for the Yarmouth-Dennis Red Sox. He was was signed by the Oakland Athletics and J.P. Ricciardi as an amateur free agent on July 10, 1986. He made his Major League Baseball debut on April 11, 1990 with the Athletics.

He is currently a broadcaster for MASN. 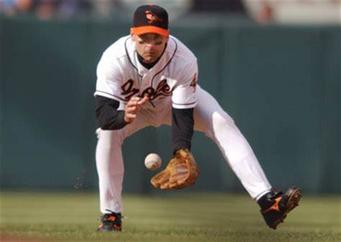 The Baseball Warehouse, LLC | 410-413-4995 | info@thebaseballwarehouse.com | All rights reserved | Website by Concepts By Q
View on Mobile