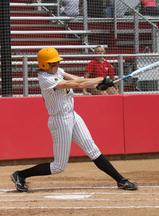 Julia Culotta is the current head softball coach at Stevenson University in Owings Mills, Maryland. Culotta’s collegiate coaching experience spans six years, five as a Division I assistant coach at her alma mater, University of Maryland, Baltimore County (UMBC), from 2011-2016. Culotta joined the staff at UMBC in June 2011 following a standout playing career with the Retrievers. During her tenure in Catonsville, she helped coach a total of nineteen America East All-Conference selections and two Rookies of the Year.

As a senior at UMBC, Culotta was named America East All-Conference after batting .384 with nine home runs, 33 runs batted in and 37 runs scored.  She ranked in the top five in the conference in batting average, slugging percentage (.645), on-base percentage (.506), total bases (89) and walks (32). In addition, she had nine doubles and was 10-of-12 in stolen base attempts on the season. Culotta ranked in the top-100 in the NCAA for batting average (96th) and walks (53rd), as well as the top-50 in the country in on-base percentage (41st). She also earned America East All-Championship team, All-Region honors, eight times an America East Honor Roll selection and six Player of the Week honors. Culotta started in 207 games in four years at UMBC, just one of fourteen to play in 200. After her collegiate tenure, Culotta was selected to the the Mid-Atlantic All-Star team hosting Team USA, as well as, being selected to the USA Storm collegiate league and Therwil Flyers in 2011. Before coming to UMBC, Culotta was a redshirt freshman at the University of Tennessee in 2007 as the Volunteers finished as runners-up at the Women’s College World Series.