Scott Thomson is a fixture in the baseball community in the state of Maryland. He began is coaching career as an assistant coach at Western Maryland College from 1992-1997. In the fall of 1998 Scott took the Head Coach position at Mount St. Mary’s University where he was the Head Coach for 23 years. While at the Mount he was the Northeast Conference Coach of the year in 2007. The Mount won the
NEC regular season championship in 2007 and the NEC tournament in 2008. Winning the tournament sent the Mount to Cary, North Carolina for the NCAA College World Series regional tournament where the Mount played the #1 team in the country North Carolina Tarheels in the first round. In Thomson’s 23-year tenure at the Mount he has coached 4 All-Americans, 47 First or Second team NEC All-Conference players, have had 25 players sign professional contracts, 2 NEC Most Valuable Player winners and one NEC Pitcher of the year. Also, in 2007 he led the Mount to a school record 35 wins and ranked 2nd in the Northeast regional coach’s poll. Before Thomson’s coaching career he was drafted by the Boston Red Sox out of high school. Instead of heading to the pro’s he signed to play four years at Old Dominion University in Norfolk, Virginia. During his four-year career at ODU he was named to the First team All-Sunbelt Conference in 1990 and 1991,
Thomson was also nominated for team “USA” in 1989, he led the Nation in triples in 1990 and batted .399 for the Monarchs. In 1991 Thomson was named Virginia collegiate player and the year and signed a professional contract with the Erie Sailors in 1991. Thomson is still currently ranked in the top 5 in five different offensive  categories at ODU. 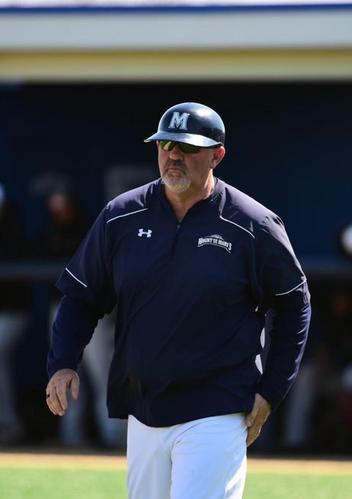